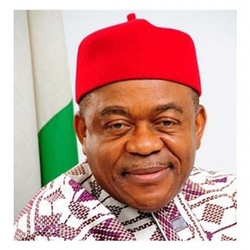 On March 1, 1996, Orji was seconded to the National Electoral Commission of Nigeria (NECON), now INEC, Abia State as Administrative Secretary and was later redeployed to Enugu State in 1997 where he supervised the elections that ushered in the democratic government in the state in 1999. Thereafter, he returned to Abia State to function as Principal Secretary, Government House, Umuahia and Chief of Staff to the Executive Governor.

In December 2006, Orji won the gubernatorial primaries of the Progressive Peoples Alliance (PPA) to contest the 2007 governorship elections in Abia State, and consequently made history as the first Nigerian governor to win his election while in detention. He was re-elected as governor on April 26, 2011.

Upon completion of his tenure as Governor in 2015, he was elected to represent Abia Central in the Senate.